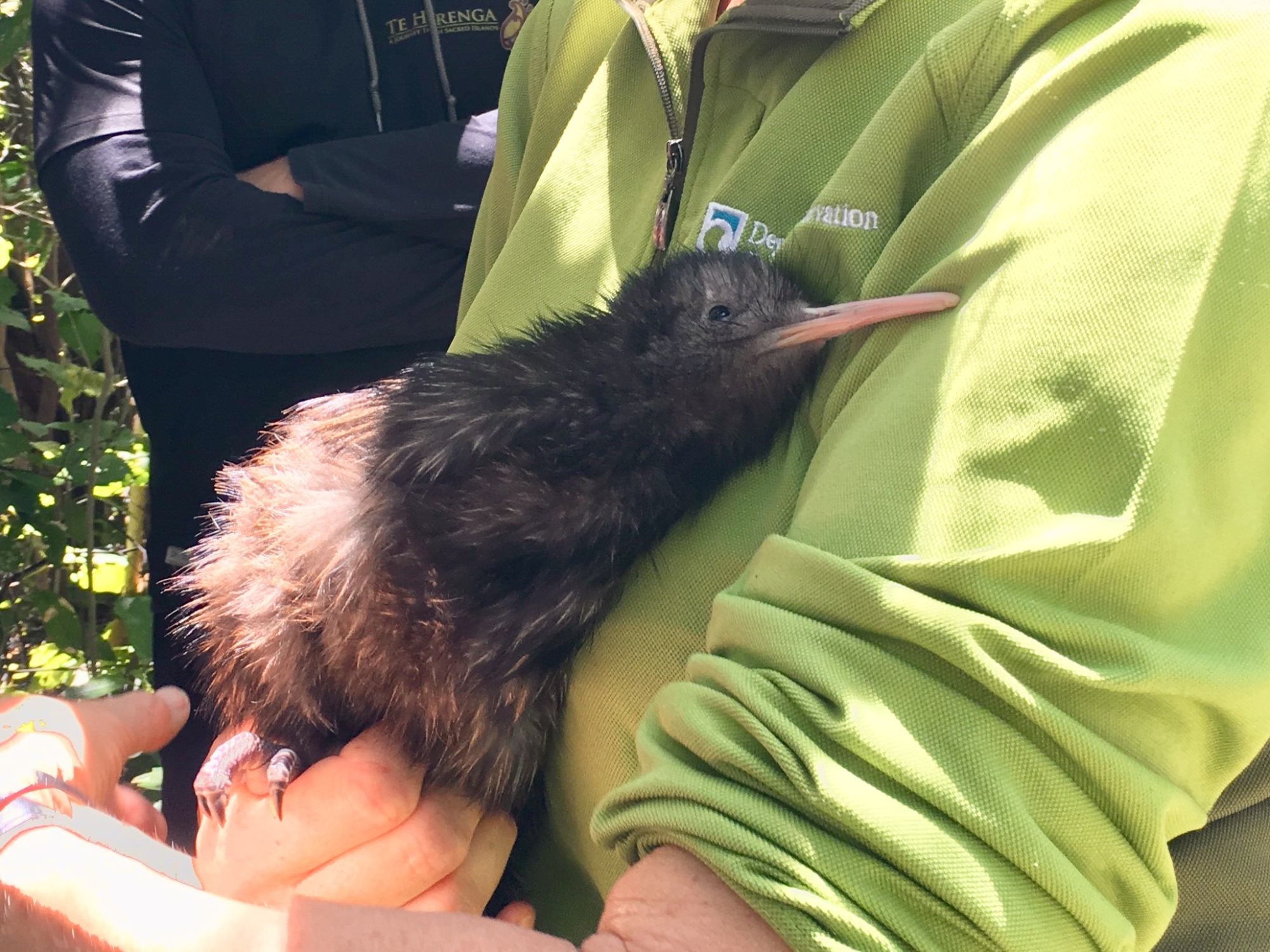 Warning, this post is full of “I can’t believe we live here” moments. This spring has been full of wildlife sightings – some just steps from our front door in Devonport.

In November, a NZ dream of mine came true. We have a goal to see kiwi (the birds) in the wild, and have even (unsuccessfully) camped out searching for them in special reserves. Read about that in our Kauri Coast blog post.

So when I received an invitation to go on a special kiwi chick release for work, I couldn’t be more excited. As part of my job, I help Auckland’s ferry company tell stories about their environmental partnerships – they sail to predator-free islands and enable conservation efforts in the Hauraki Gulf. Many islands are home to native birdlife that can’t survive on the mainland where there are pests (rats, skinks and even domestic dogs and cats).

Motuatpu Island’s Restoration Trust is working with the Department of Conservation (DOC) and Kiwis for Kiwi to provide a safe haven for New Zealand’s native birds. Throughout the summer, they’re releasing chicks weekly, and invited some of their partners to witness – or attend the housewarming is how I like to think of it 🙂 As professional matchmakers, they’re hoping that the chicks will find suitable mates, and subsequently bolster the population and diversity the gene pool of kiwi on the island. 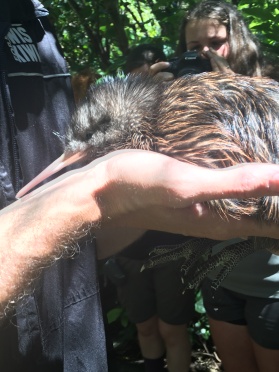 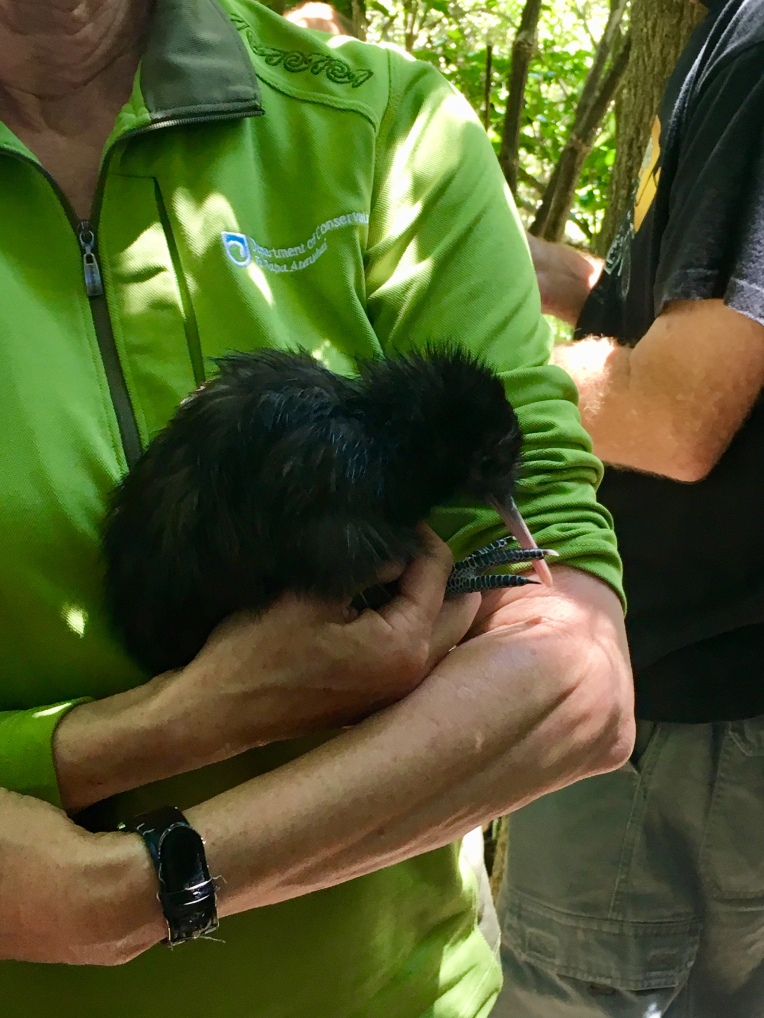 It was an incredibly emotional experience to witness each of the four birds be blessed by the local iwi and named in their own karakia. The iwi asked children to help name the kiwi, and the birds ended up with the very traditional names of Brownie (for its colour), Brodie (because it’s obviously a surfer bro kiwi) and Lauren (named after the girl’s mom). Too funny! There was one royal kiwi in attendance, who was actually named Koha by Prince Harry and Meghan Markle when they visited Rotorua. 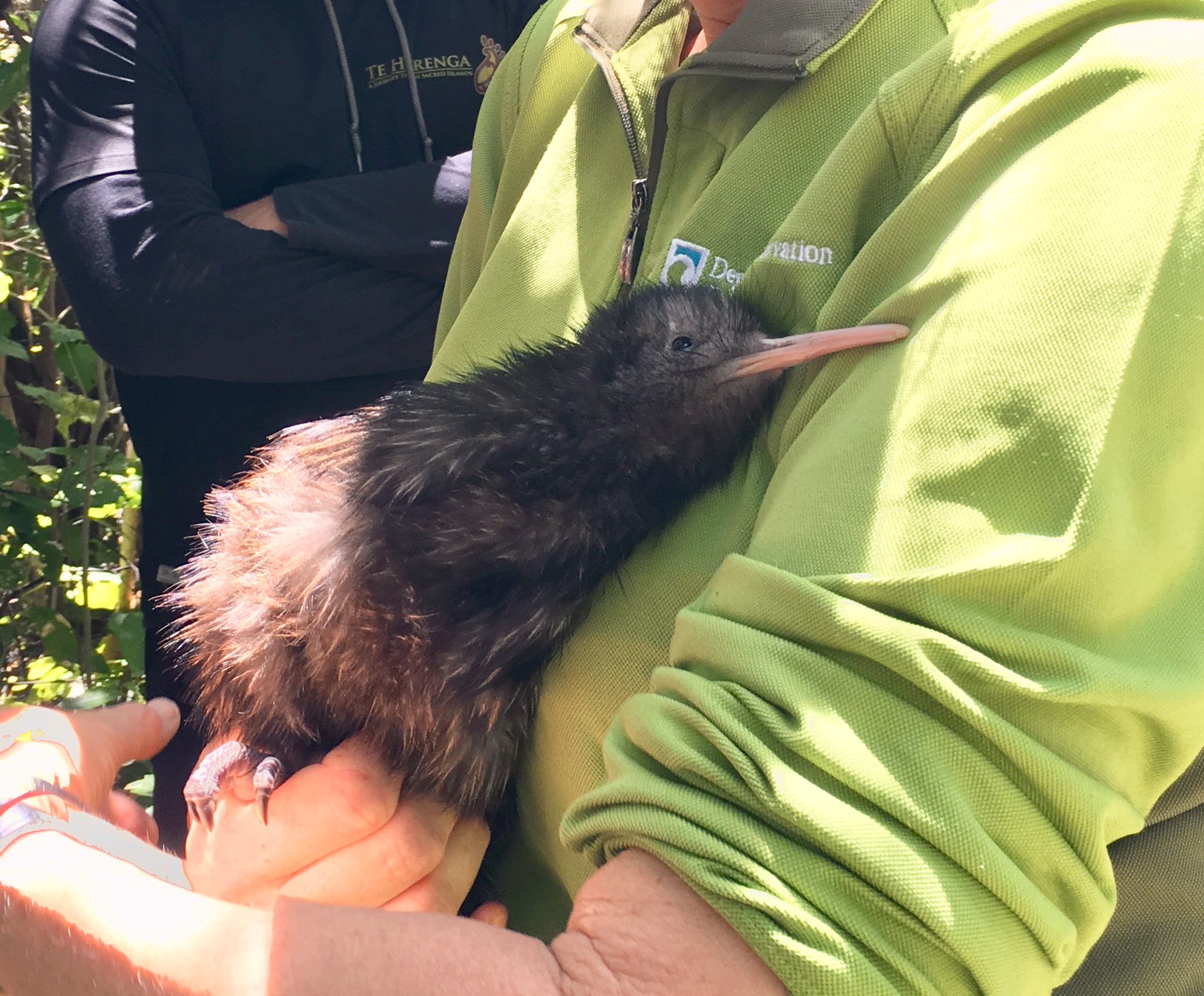 Working for a ferry company, I hear about every pod of dolphins in the harbour. On slow news days, I often get reporters ringing through for comment from the skippers who slowed down to let morning commuters get a better view of the dolphins playing in the boat’s wake. And every time, I’ve been absolutely gutted to have missed it. Sometimes I’ve been on the sailing directly before the lucky dolphin-spotters…. And sometimes, there are orca! Just when I started feeling sorry for myself, my luck turned.

But first, on one of those mornings where I was already at my desk intercepting dolphin videos for use on social media, I got an even cooler video from Brett. He walked outside, crossed the road to the waterfront, and saw a pod of dolphins playing right next to the Sea Scout Hall – cheekily playing with a paddleboarder! 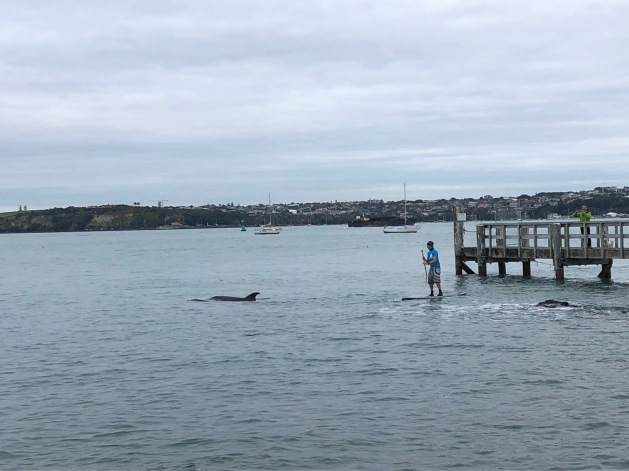 Then, on two occasions we spotted orca in the harbour – thanks to the North Shore Whale and Dolphin Watch Facebook group. I now have alerts turned on so I never miss a post about marine mammals in the Gulf! Again, I was sitting at my desk watching the alerts for a couple hours – as a pod of orca slowly made their way south from Torbay to Takapuna. I managed to jump on the ferry at the end of my work day, and make it to Cheltenham Beach just as they arrived. (Brett picked me up at the ferry and we rushed over in the car!) We walked the base of North Head, following them all the way around to the inner harbour. Unfortunately, they were too far out to take decent photos, so you’ll just have to trust us! We were watching these kayakers – can you imagine?!

Fast forward a few weeks, and we were again taking an evening walk around the base of North Head. Brett spotted a strange looking rock on one of the secret beaches only accessible from this coastal trail. Except it wasn’t a rock… it was a seal sunning herself! We called our friend who’s a Department of Conservation ranger on North Head to come have a look. We had heard stories about notorious Leopard Seal, Owha, who terrorises yachties at local marinas and thought it may be her! Turns out that it was an Elephant Seal, which is an incredibly rare visitor to Auckland – they live in much colder waters near Antarctica!

We watched her for about an hour hopeful we’d be able to see her make her way back to the water. But she must have been comfy, only raising a flipper, scratching her belly, or looking at us curiously every now and then. The next day, she appeared again across the harbour on Mission Bay beach – treating lots of other spectators to her antics! She returned to Devonport later as well, swimming around Torpedo Bay, but we missed her. 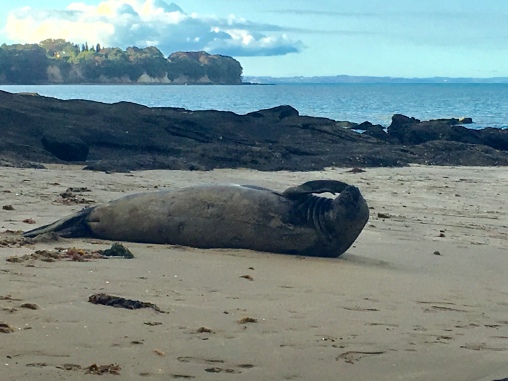 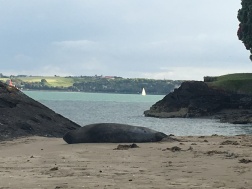 A not-so-wild encounter with Bertie

Lastly, we finally got an up-close view of Bertie, Devonport’s resident sulphur-crested cockatoo. (She’s one of the biggest reasons I love Devonport so much. Our neighbourhood is seriously the cutest.) Bertie lives in a Pohutukawa tree on prime real estate – a King Edward Parade corner plot. A sign at the base of the tree ensures visitors that she’s a local and belongs in her tree. She says “hello” and wolf whistles at passer-bys. Of course, we visit her often! 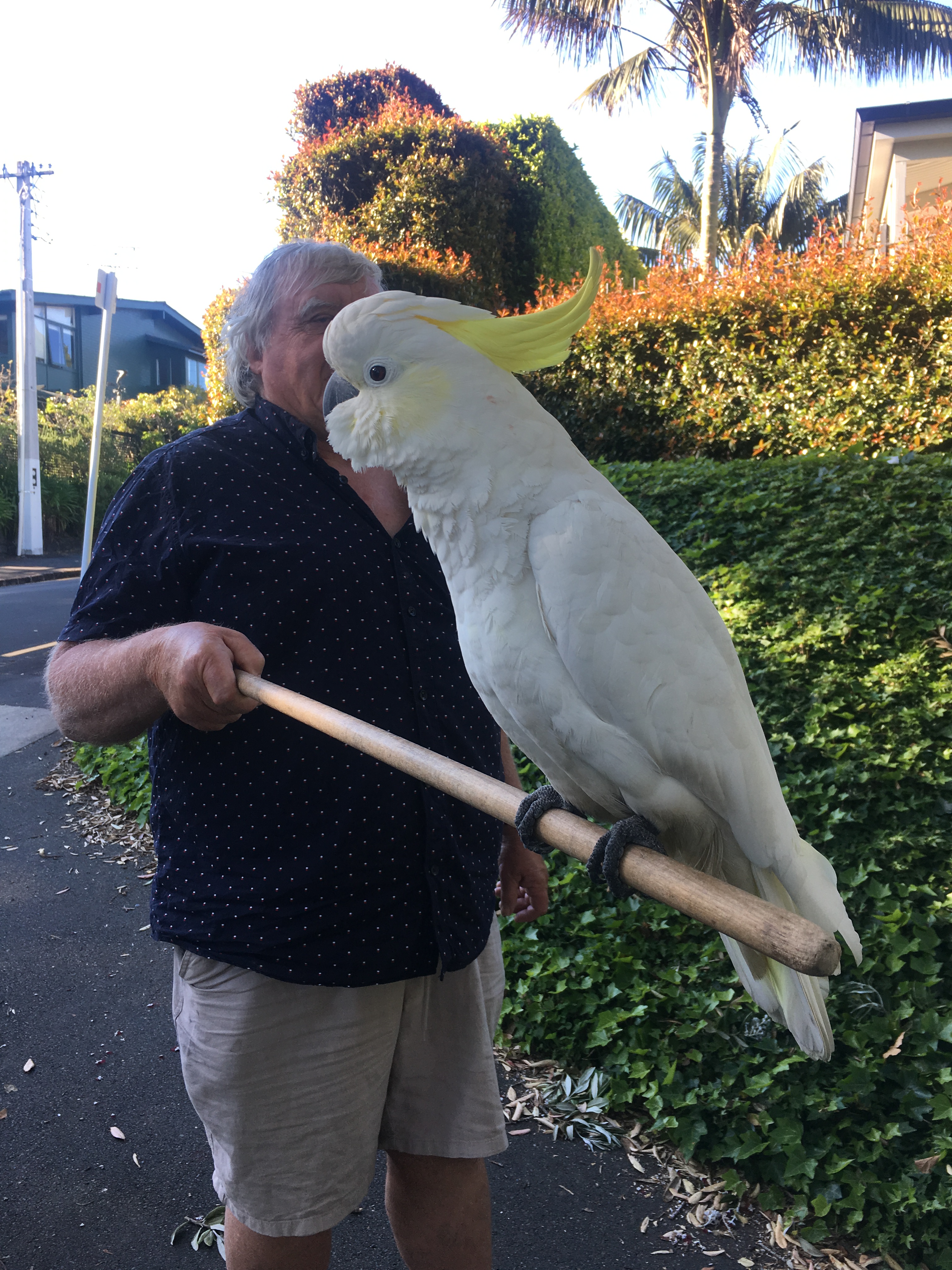 Her family lets her enjoy the sun on nice days, before she retires to her indoor coop in the evenings. When her dad decides it’s time to come in, he steps into the base of the tree and coaxes her down with a “Here Bertie! Here girl!” She then scuttles and side steps her way down the tree trunk, climbs on to her stick and happily rides home. 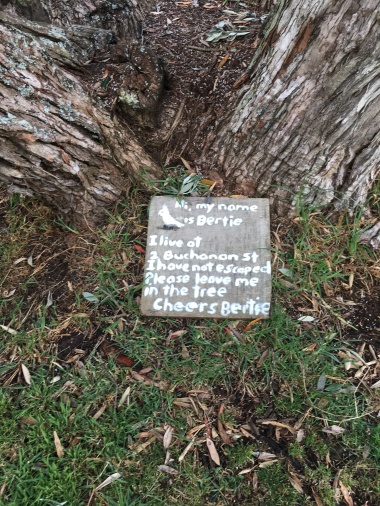 Side note – I love her so much, I dressed up as her for Halloween (which we spent in Devonport!) Brett was my Pohutukawa – what a good sport 🙂 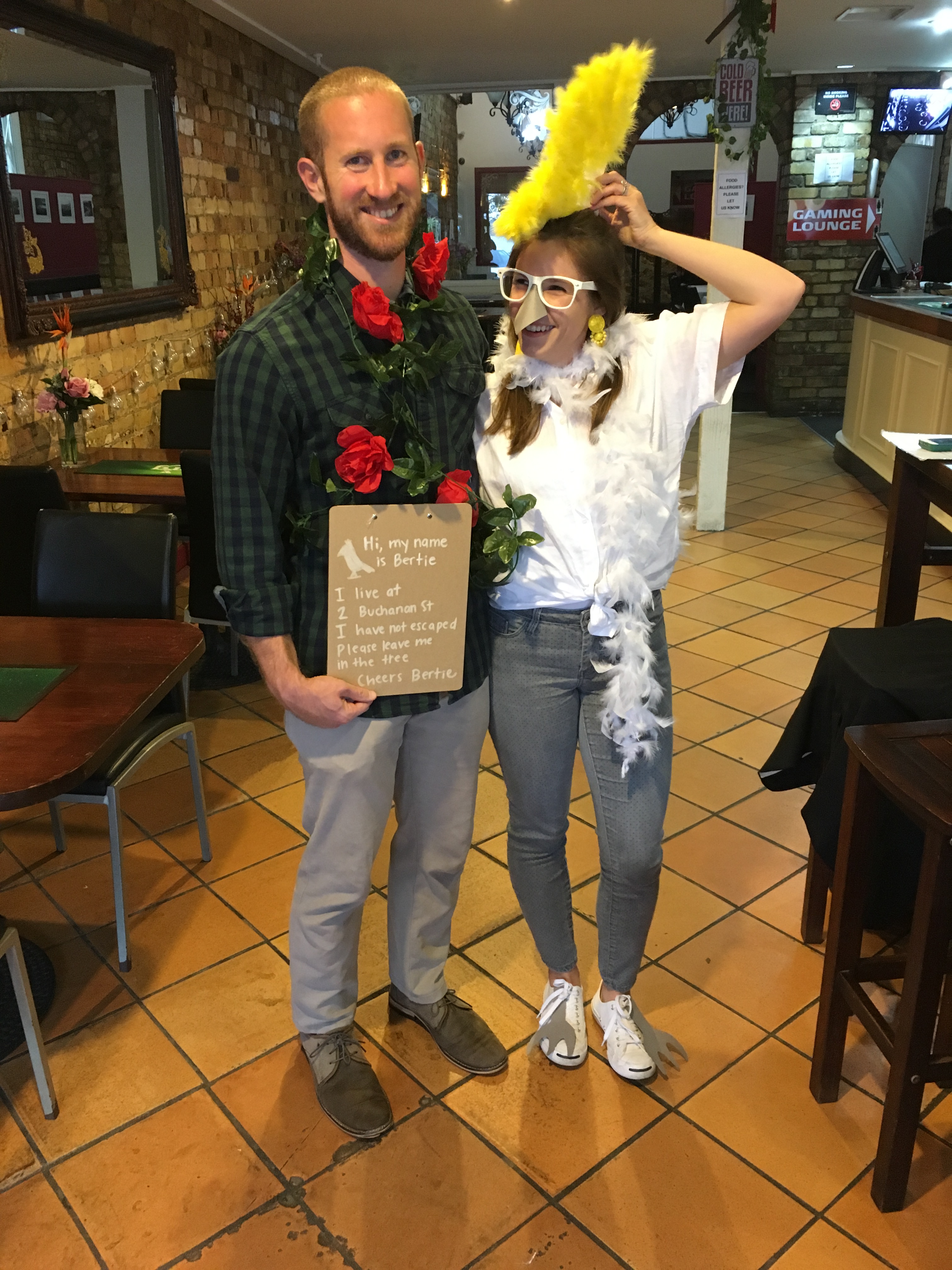 One thought on “From kiwi to orca: Hauraki Gulf wildlife encounters”