Of my Bali must-do list, the amount of attractions close to Ubud was a mile long. The only reason I was (semi-) okay with checking out of the beautiful Karma Kandara resort was all of the Ubud excitement to come. Located in the jungle, Ubud is definitely a contrast to our beach resort – but considered to be the cultural centre of Bali.

While Ubud is definitely touristy, it feels more laid back and authentic than Seminyak. The streets may have potholes, and the sidewalks are falling apart, but there’s an element of zen to balance out the grunge. With the abundance of temples, yoga studios, massage spas and smoothie bowl shops, its spiritual and wellness vibes were running high. Throw in the live music and nightlife, and it’s the perfect backdrop for a happiness retreat.

Here are our top picks for the best of Ubud:

Accommodation: A private villa hidden away on a working rice field. Our AirBNB (chosen by our friends!) was probably the coolest place we’ve ever stayed. It was the perfect hideaway, yet easy walking distance to the centre of town – located down a small back road from Ubud’s central market, and up a walkway (or scooter path?!) along the rice terrace. Because the private villa wasn’t accessible by car, our host met us with his amazing team of four – who quickly strapped our luggage to the back of their scooters.

We had two identical suites, framing our own infinity pool in the jungle. Breakfast (all included) was served on our twin balconies overlooking the pool. Talk about spoiled (again). Our only regret is not staying longer!

Overall Activity: Monkey Forest.  Next on the list was the Sacred Monkey Forest Temple. In fact, we went back twice because for the animal-obsessed (me!), it was just pure bliss. Monkeys are a sacred animal in the Balinese Hindu beliefs – and in the forests (and the streets) they roam free. There are roughly 700 monkeys resting on Hindu temples, climbing tree vines, and climbing all over you. 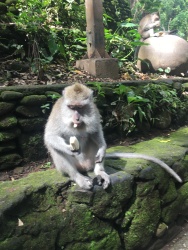 You could buy a bunch of bananas for next to nothing for feeding purposes. The banana-mongers showed us the strategy to invite a monkey to sit on your shoulder – by facing away from the forest and holding a banana up at beside you – at shoulder height with a bent arm. Seconds later, a monkey would land on your shoulders, or even climb up your body from the ground. You never knew whether you’d get an aggressive and greedy one, or a sweetie who wanted to hang out for a while. 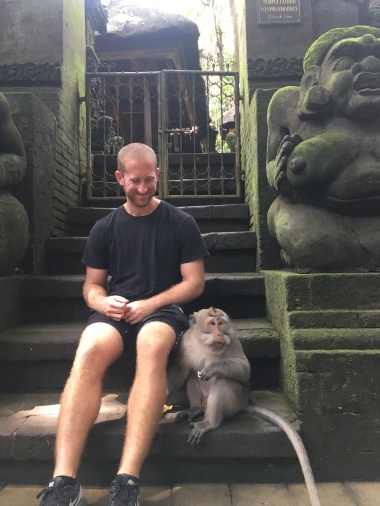 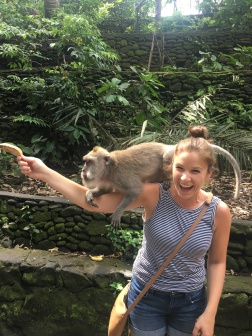 My favourite was when I had two in my lap at once! Just be careful to hide the remaining bananas well – they will attack you for them! Brett ended up with a smashed phone because a monkey thought he was hoarding bananas in his pockets (instead of an Apple device). Other times they tried to get into my backpack, stole a bottle of lotion, and refused to leave our friend’s shoulder. (He had a scab on his nose, and the monkey tried to pick it!) 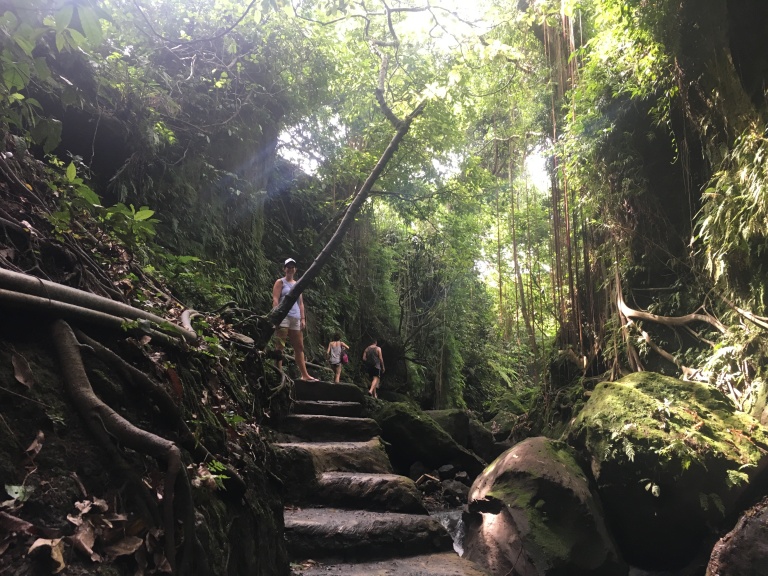 Temple: We had already seen quite a few temples from our stay in Uluwatu, but visited one more on our way into Ubud. We explored the Goa Gajah Elephant Temple, which was very cool and not too crowded. It’s actually a UNESCO heritage site. There are several bathing temples, but the main attraction is the Elephant Cave. It has both Hindu and Buddhist symbols, but thought to have been built for meditation.

Rice terrace: We took a quick 30-minute jaunt with a driver to Tegallalang Rice Terrace, which was beautiful. I’d never seen anything quite like the terraces, with layer upon layer of curving, narrow footpaths. You’re free to explore the paths, but locals sit at certain “checkpoints” asking for donations for the upkeep of the fields. 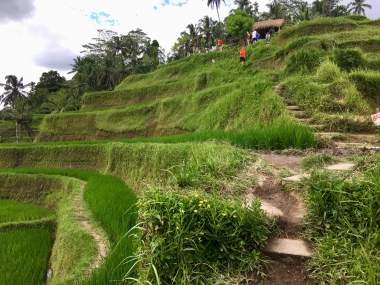 There are also tons of swings that propel you over the fields if you’re feeling adventurous. We stopped at a different swing that our driver swore by – but it probably wasn’t worth the extra stop if you’re already at Tegallalang.

Massage & Yoga: If you want to have a truly unique, traditional massage experience, check out Nur Salon. Warning, not for the overly modest. And for me, I could not bear to leave Bali without going to yoga class in the jungle. I went to the most Bali-famous spot for a morning vinyasa class – The Yoga Barn. I did a vinyasa class with visitors from all over the world, but would have loved to go to another studio for a more spiritual, local yoga experience. 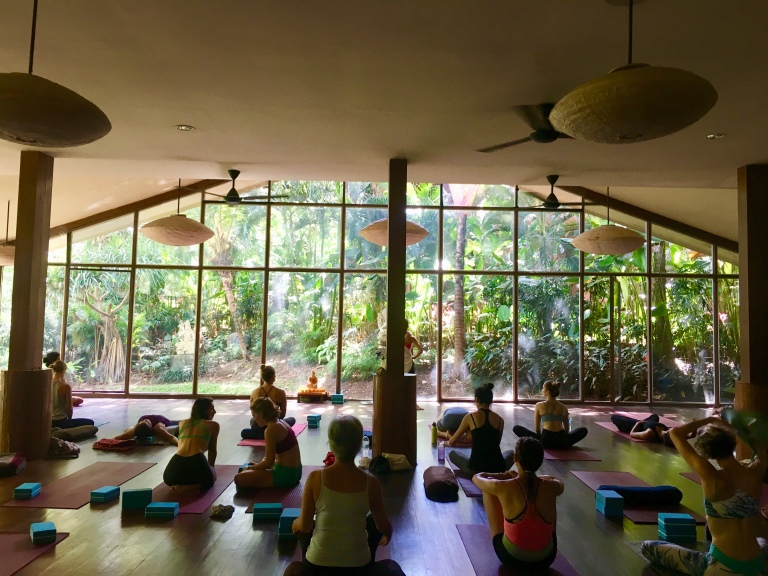 Live Music, Markets, Restaurants: There were SO many choices. We spent some time in the Open Market, but honestly it was overwhelming being harassed to buy things that you hardly even glanced at. All vendors will bargain with you, but we found it stressful having to say ‘no thank you’ each time – not because the price wasn’t good, but that we just weren’t interested! We had a great time listening to live music at the Laughing Buddha, followed by dancing to reggae late-night. 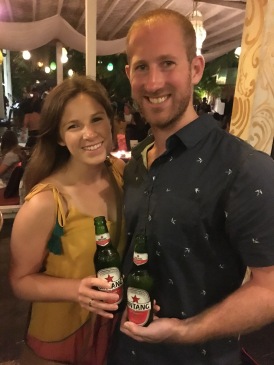 We had plenty of delicious Balinese food (read: Nasi Goreng) but the coolest spot was built into a cliff was near Goa Gajah – thanks to our driver for the find. Plus, we even had some tacos in town (duh). 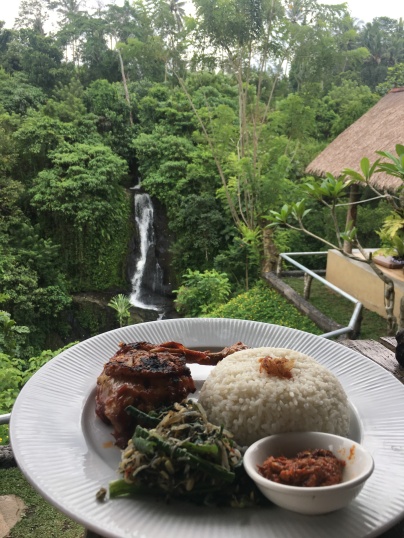 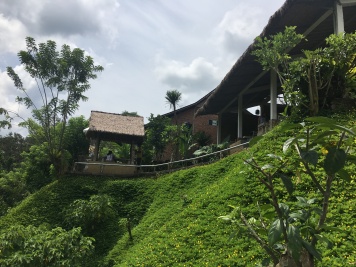 In conclusion… If you’re planning a trip to Bali, I’d definitely recommend staying in Ubud for at least two nights, as well as one other beach location. Because it takes so long to drive everywhere on Bali roads, strategise your itinerary by grouping several nearby attractions into one day with a driver. Concentrate on the area closest to your current accommodation, and then move hotels to access the rest. We were able to have long mornings by the pool, followed by evenings out exploring.

Bali, you have my heart. I can’t wait to come back!