Adrenaline rush or pure relaxation – Queenstown has it all. In my last post comparing Queenstown to Wanaka, I was solidly in camp Wanaka. But after a second (completely different!) visit to Q-Town, it’s evening the scores.

One of my longtime besties and college roommate was visiting New Zealand, but a long weekend in Auckland just wouldn’t be enough time spent together. Before she came up north, I met her in Queenstown for a 48-hour reunion — and it was no short of amazing.

The first time Brett and I visited, it was a reprieve from the campervan during our South Island adventure. After a lot of hiking and time spent outdoors, we took advantage of being in a larger city and indulged in a bit of luxury. That said, even though we had a great time, we missed so much!

While of course we knew that Queenstown is the adventure capital of the country, we skipped the heart-pumping activities for two reasons. 1. We had spent so much money already, and these activities will likely run you a minimum of $150. And 2. Since they’re all outside the city centre, the last thing we wanted to do was get back in the campervan as transportation.

But what we didn’t know is that almost all the adventures (even wineries!) are accessible by complimentary and convenient shuttles included in the price of your booking.

Shotover Canyon Swing: A little more expensive than the more famous Nevis Swing, the Shotover was our swing of choice for a few reasons: 1. You can jump (or be cut if you’re a wuss like me) off in more than 70 different styles — including being tipped backwards in a chair, or going down a slide! 2. It only took about 2 hours round trip vs. the 4 hours to trek to the Nevis and back. I was terrified getting strapped into that harness, but so glad I did it. While the actual descent is thrilling, they let you swing like a pendulum until you eventually stop, and then give you time to hang (literally) in the canyon, taking in the views before you’re pulled back up. Will definitely be back, and would love to try the ziplining as well! (Cost: $229)

Shotover Jet Boat: I had read great things about this, including bang for your buck. The Jet Boat is less of an adrenaline rush, but also much less expensive than the other activities. We decided to book a package deal with the Canyon Swing (since they’re right next to each other, and offer transport in between). I wasn’t sure exactly what to expect, but was pleasantly surprised. The the views were absolutely incredible – access to the crystal blue river alone was worth the money. (Cost: $145, but ask about combo deals with other activities to save you roughly $50)

ONSEN Hot Pools: After a day of adventure, we took time to unwind on Sunday. ONSEN is the definition of relaxation. For an hour, you have access to a private pool for up to four guests. Except if you’re anything like us, you’ll spend the first 15 minutes taking photos. Open the retractable roof for the most insta-worthy shot. Even with the roof open, it’s the perfect rainy day activity. (Cost: dependent on group size – $35-$44/person) 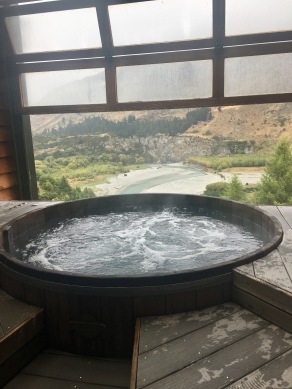 Gibbston Valley Winery: The girls did this after I left, but I’ve added to my list for when I go back. No need to worry about drinking and driving — the winery offers a shuttle so you can indulge as much as you’d like. (Cost: Transportation only – $35, but other tours/packages available)

So whether you’re flying in and don’t want to rent a car, or can’t stand the thought of driving after a long road trip – there are many ways to get out of Queenstown’s centre city. Adventure (or relaxation) awaits!

Last peak of 2019 ⛰ #dragonscrest
When in Thailand... drink all the American beers you miss 🍺 Beery Christmas to all 🎄
#PeaksandHops in wine country 🍷 Marlborough adventure up on the blog!
Throwing it back to when we were literally on @cloud9_fiji ☁️ Fiji recap up on the blog!
Kailua, Hawaii trip now wrapped up on the blog 🏝 A long weekend with the parents, filled with Jeep adventures to turtle-spotting 🐢
Crisp beer on a sunny spring day ☀️ @garageproject #peaksandhops
%d bloggers like this: